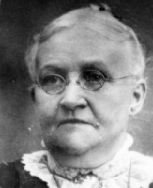 Charles Lambert was born August 30, 1816 in Kirk Deighton, Yorkshire, England. He was the son of Charles Lambert and Sarah Greaves. Charles became a member of The Church of Jesus Christ of Latter-day Saints and emigrated from England to America. He lived in the Nauvoo area of western Illinois. While in the Nauvoo area, Charles met another young convert and English immigrant named Mary Alice Cannon. She was born December 9, 1828 in Liverpool, Lancashire, England, and was the daughter of George and Ann Quayle Cannon. Mary had come to America with her parents and siblings. Unfortunately, her mother, who was pregnant, became ill and died just before they arrived in America. Her father, George, died a few months later. Charles and Mary were married November 28, 1844. Because she had younger orphaned siblings, Charles and Mary took them in. Mary's older brother, George Quayle Cannon, went to live with their aunt and uncle, Leonora and John Taylor.

When the latter-day saints were forced by the mob to leave Nauvoo and move west, Charles, Mary, and three of her younger siblings left as well. Mary's younger brother, David H. Cannon, summarizes much of what happened to them at that time in his history. After many months of difficulties, they finally arrived in Salt Lake City, Utah.

Charles and Mary Alice had the following children:

The Autobiography of Charles Lambert: This comes from the archives of The Church of Jesus Christ of Latter-day Saints.

A Brief History of Charles Lambert: Biography written by Lurena Eldredge Warnick and excerpts taken from the book, "Cannon Family Historical Treasury", published 1967 by George Cannon Family Association. This history includes a photograph of Charles. It is located at familyforever.com.

Charles Lambert and the Nauvoo Temple: This was written by David Kenison of Orem, Utah.

Charles Lambert and the Miracles of Migration: This was also written by David Kenison of Orem, Utah.

Cemetery/Burial information for the Charles Lambert Family: Currently, we only have cemetery records for Charles and Mary Alice.

Photo of the Charles Lambert Family Home: This home was located at 200 West and 400 South in Salt Lake City, Utah. Pictured in front of the home are Charles and Mary Alice's daughters Sarah and Mary Alice.

Photo of the Charles Lambert's Home in Kirk Deighton: This is Charles' home in England. Some of Charles Lambert's descendants have claimed that this is a picture of Charles' home in Nauvoo, Illinois. However, Charles and Mary Alice did not have a home like this in Nauvoo. They were very poor while they lived in Nauvoo, and their home was probably made out of wood. Compare this picture to the homes and buildings in the photographs taken by Nigel Proud, linked below. Other family members have contacted us saying that their copies of the picture are labeled Charles Lambert's house in Kirk Deighton. Thanks to those who helped clear this up!

Elizabeth Lambert's Penance: Elizabeth Lambert is Charles Lambert's Great-grandmother. The penance was required of her because she married a relative, and was carried out in the church in Kirk Deighton. (A picture of the church was provided to us by Nigel Proud.) This copy of the original church document dated February 16, 1777 was provided to us graciously by a friend of the family. Thank you very much! More information about John Lupton and Elizabeth Lambert can be found at the Lambert-Tomlinson Family Web site.

Henry Thomas Lambert: Henry is the second great-grandson of John Lupton and Elizabeth Lambert. He was born in 1869, and died November 31, 1937. Nigel Proud had the following to say about Henry Lambert: "Henry Thomas Lambert and his first wife Eliza Hoyle also had [in addition to the 3 children listed below] a son, Ernest who was born in 1896 and died at the age of 18 due to appendicitis, and two daughters, Gladys Kitty born 1893 and Phyllis Mary born 1903. Eliza Hoyle Lambert died November 2, 1919. Henry Thomas had a coal and grocery business as well as having a bit of property. He used to donate money to a church at Kippax in Yorkshire. One time, they built a wall with his donation and when it was finished he was presented with a Gold Key. A few weeks later, he reversed his lorry into it and knocked it over! Oh well.... In the photo of Henry walking with an umbrella in his hand, you might notice his left eye is half closed. This was caused by a horse. It kicked him in the eye." Henry's photograph was also provided by Nigel Proud.

George Henry Lambert: George is the son of Henry Thomas Lambert. He was born in 1898. George's photograph and information are provided courtesy of Nigel Proud.

Lilly Lambert: Lilly is the daughter of Henry Thomas Lambert. She was born in 1902. Lilly's photograph and information are provided courtesy of Nigel Proud.

David Lambert's Family Photo album: David Lambert was Charles Lambert's nephew. This album was recently purchased by Roger Vaughan, a collector of Victorian era photographs. Mr. Vaughan has scanned the entire album and posted it on his Web site. The album is quite large, and is spread out over 18 pages of his site. The album includes photographs of Charles and Mary Alice Cannon Lambert that were taken in Manchester, England, in 1882. Additionally, Mr. Vaughan has added David Lambert's family record from the 1881 British census. We thank Mr. Vaughan for his hard work and his willingness to share the photo album with us.

Photos of Charles Lambert's Home Town, Kirk Deighton: Nigel Proud recently visited Kirk Deighton. He photographed some places of interest to the Lambert family and graciously sent them to us so that they could be included here. Thank you very much Nigel! The first picture is looking up the street toward the church (All Saints Church) that the Lamberts and Luptons attended. On the left hand side of this street (but not clearly seen in the photo) is a public house called the "Bay Horse" where the Lamberts used to meet. The second picture shows the same street that is in the first picture, but in this one, you can see the "Bay Horse" on the left, behind the yellow car. The third photograph shows the church and the church's gate at the end of the same street. The fourth picture is a close up of the gate of All Saints Church. The fifth photograph is a picture of the church itself.

History of David H. Cannon: David is Mary Alice Cannon Lambert's younger brother. This history describes much of what happened to the Lambert family in the 1840s and 1850s. There is also a new Web site for the family of David H. Cannon located at www.davidhcannon.org.

The Lambert Family Genforum: An extensive free site for exchanging information about the Lambert family.