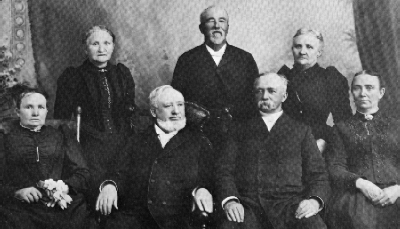 George Cannon, the son of Captian George and Leonora Callister Cannon, was born December 3, 1794 in Peel on the Isle of Man. George married Ann Quayle, daughter of John and Ellinor Callister Quayle, in 1825. Through the efforts of George's sister and brother-in-law, John and Leonora Taylor, the family joined The Church of Jesus Christ of Latter-day Saints. They decided to emigrate from England to America. They departed from England on the ship Sidney. Shortly after they began their voyage, Ann, who was pregnant at the time, became ill. She was ill during the entire voyage, and died just before the ship arrived in New Orleans. She and her unborn child were buried at sea. George and his children settled in Nauvoo, Illinois. In February 1844, George married the widow Mary Edwards White (Photo of Mary--courtesy of Leslie A. Ballou). [Mary Edwards White was her married name. Mary was born to Thomas and Elizabeth Edwards on September 30, 1810 in Llanwrst, Denbighshire, North Wales. She married Joseph White. The two of them also joined The Church of Jesus Christ of Latter-day Saints, then set sail for America in 1843. Joseph died before they reached Nauvoo. We do not know whether he died at sea, or if it occurred after arriving in America. Elizabeth stayed with John and Leonora Taylor when she arrived in Nauvoo. She later married George Cannon. Elizabeth's third husband was Charles B. Taylor. For more information, see the Cannon Family Historical Treasury (1995 edition), pages 61 and 288.] George and Mary eventually had a daughter named Elizabeth Cannon. When the Prophet Joseph Smith and his brother Hyrum were murdered in June 1844, George made plaster casts or "death masks" of their faces. Shortly thereafter, George himself died from heat stroke August 19, 1844. George and Ann's son, George Quayle Cannon, and their daughter Ann Cannon, went to live with their aunt and uncle Leonora and John Taylor. Their daughter, Mary Alice Cannon, married Charles Lambert. The three younger children stayed for a while with their step mother, then eventually went to live with Charles and Mary. Baby Elizabeth, who was born after her father's death, remained with her mother. The family headed west with the pioneers and settled in Salt Lake City, Utah.

The 2005 George Cannon Family Reunion was held October 8, 2005 at "This is the Place" Park in Salt Lake City. It was an all day event with a dinner. A small program was held in conjunction with the dinner. Family members participated in a variety of activities throughout the day. Copies of the Cannon Family Historical Treasury were made available for purchase. To join the George and Ann Quayle Cannon Family mailing list, please contact Stuart Cannon via e-mail or at (801) 772-0378.

Among Family and Friends: John Taylor's Mission to the British Isles. An article, written by Paul Thomas Smith, about John Taylor's mission to England, during which he brought the Gospel of Jesus Christ to his brother and sister-in-law (George & Ann Quayle Cannon). This article was published in Ensign magazine, March 1987.

Selections from the Journal of George Cannon (the immigrant): This brief document tells of how the family joined The Church of Jesus Christ of Latter-day Saints, their voyage to America, the illness and death of his sweetheart, Ann Quayle Cannon, and the remainder of their trip to Nauvoo. George made the plaster death masks of the Prophet Joseph Smith and his brother, Hyrum Smith, the Patriarch.

Illustrated account of the conversion of the Cannon Family: An illustrated account of the George Cannon family being taught the gospel by Elder John Taylor was published in the June 2003 issue of the Friend magazine. The Adobe .pdf version of the article can be found at LDS.org, or you can download parts 1 and 2 in .jpg format here. Adobe Acrobat Reader is required for the Adobe version.

Charles and Mary raised the three younger children of George and Ann. They had many adventures on their trip west to Utah. Photo of Mary Alice Cannon Lambert. Photo of Charles Lambert.

Ann lived with her uncle and aunt Taylor after her parents died. Photo of Ann.

The History of David Henry Cannon:

Copies of this fabulous book about George and Ann Quayle Cannon and their descendants are still available. For pricing and ordering information, please contact Hunter Cannon at shcannon@qwest.net.

The Cannon Family Genforum: The Cannon genforum is free a "bulletin board" service for people who are interested in the Cannon family world wide.

The farm that used to belong to the family of George Cannon on the Isle of Man is called Cooil Shellagh, which means "willow nook." The farm is now owned by Paul & Lindsey Hotchkiss. They currently rent out cottages to tourists. If you are planning a trip to the Isle of Mann, Cooil Shellagh would be a great place for you stay.