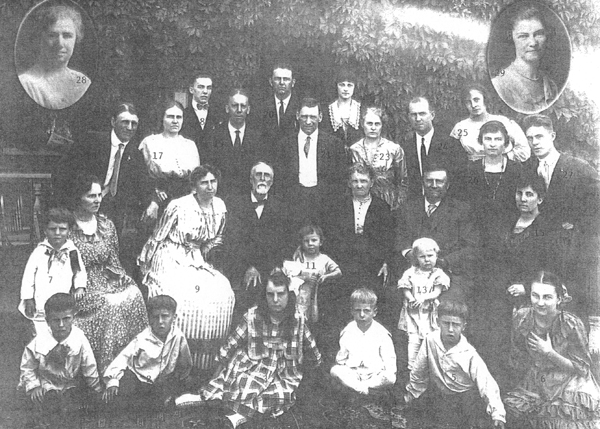 Pictured above are members of the Aveson family. The picture comes to us courtesy of Rosemary Riley. The photograph was taken on July 26, 1919, the fiftieth wedding anniversary of Robert and Mary Ann Rawlings Aveson. According to the portrait's description, the entire family (at that time) is included.Unfortunately, the label numbers are hard to make out in this copy of the picture. The people in the picture are as follows:

If you have questions or comments, or would like to share photographs or information about the Aveson family, or would like some specific information, please contact us at postmaster@sedgwickresearch.com. We are especially looking for personal histories and photographs. Thank you!

Robert Aveson: A brief history of the life of Robert Aveson, from Andrew Jenson's, LDS Biographical Encyclopedia, Vol. 1, p.679. Robert also wrote his own history, entitled Leaving Home. Robert's history is focused on his boyhood, his friendship with Richard Sedgwick and their conversion to The Church of Jesus Christ of Latter-day Saints, their emigration to the United States of America from England, his journey to Utah, his family's conversion and emigration, and more.

The Fawcett Family GenForum: Fawcett is Robert's mother's family name. The Fawcett GenForum is free a "bulletin board" service for people who are interested in the Fawcett family world wide.